Jolie Rouge is an inmate in the Asylum for Wayward Victorian Girls, the leader of The Striped Stocking Society and one of Emily's best friends.

Jolie Rouge and her unnamed sister lived with the Count de Rothsberg. After her twin sister was murdered, she attacked the Count and gouged out his eye. He survived the encounter and she was sent to the Asylum.

Jolie claims she is a pirate and demands to be addressed as "Captain". She also tells stories about her adventures, which are veiled references to her miserable life at Bainbridge. Not many believe her, except for little Flea, and Emily, out of pity.

In the book, during a public washing for the Ophelia Gallery Jolie's hair starts falling out in clumps. She is forced to be shaved, to which she protests violently, and is subsequently put in to Quarantine. The hair belonged to her late sister, and Emily realizes that Jolie is the missing girl from Bainbridge that Anne told her about. After several weeks in solitary, Jolie is observed in the dining hall, defeated-looking and with all of her hair shorn off. The other inmates donate locks of their own hair and make a plait for the Captain, who accepts it with a smile. 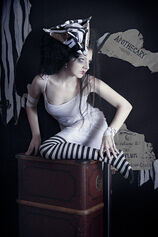 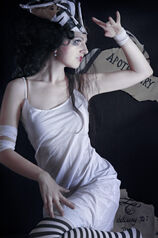 Add a photo to this gallery

Jolie Rogue is described by Emily as looking like a gargoyle, and on closer inspection, having a mass of tangled black hair (blonde in the audio book), dark eyes, and wearing a tricorne made out of scraps of rubbish and the striped Asylum wallpaper.

Jolie has a short temper and copes with the loss of her beloved sister by being verbal with the other inmates, including Emily. But she is shown time and time again to genuinely care about her fellow girls whether she is familiar with them or not, often taking great risks to herself in protecting them, as is a captain's duty.

Retrieved from "https://emilie-autumn.fandom.com/wiki/Jolie_Rouge?oldid=5751"
Community content is available under CC-BY-SA unless otherwise noted.